The 25th Annual Seabury Quinn, Jr. Playwrights’ Festival is almost here! The featured, Thesis Productions of our Third Year MFA Playwrights debut and run through this weekend, April 18th-20th, and next, April 24th-27th in Kantner Hall on the Elizabeth Evans Baker Stage. To celebrate the opening of the featured productions, and leading up to the festival staged readings on the 25th, 26th, and 27th, we will be featuring daily spotlights on Ohio University’s nine MFA Playwrights. 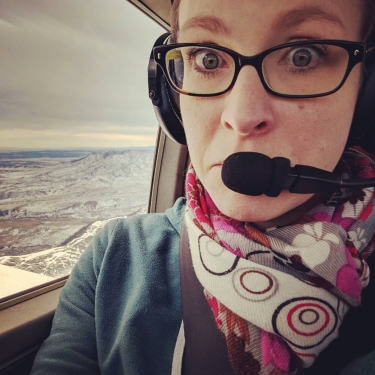 Name: Jean Egdorf
Age: 32
Pronouns: She/Her/Hers
Hometown: Los Alamos, New Mexico
Undergrad: BFA Applied Theatre Technology & Design, English Writing; Metropolitan State University of Denver
Favorite TV Show: Twin Peaks (and I’ve got the tattoo to prove it)
Favorite Play (or, that’s stuck with me the most): Franca Rame’s “A Woman Alone”
“Fun fact”  related to The Evolution of Rattlesnakes: When I was a teenager, I really wanted a pet snake (I had a friend who owned snakes, so this didn’t just come out of no where. If you ever get to hold a snake, do it, they’re incredible). I brought it up with my mom once, and she has never shot down an idea faster.
Twitter: @oblondada
New Play Exchange: Jean Egdorf
See Jean’s staged reading of The Evolution of Rattlesnakes
Directed by Dusty Brown

Rattlesnakes are evolving to lose their rattles. Man has spent so long wiping out the ones that make noise, it’s become a better defense mechanism to remain silent. Denni Erwine is arrested for the murder of the Drybrook County Sheriff. According to their statements, she only struck back against the Sheriff in defense of her neighbor, Louisa Trelawney, but there is more coiled up in the case than either woman is willing to say. To prevent it from striking more than once, is there only one way to deal with a venomous snake?