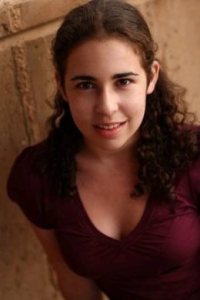 Ohio University MFA Playwriting Student Catherine Weingarten is in the national news this week spearheading a charge to improve the world-wide conversation about body positivity. She has teamed up with Endangered Bodies to ask Facebook to remove an emoji that one can choose to self-describe as “feeling fat.” The Washington Post, ABC News, People, Huffington Post and many others (links below) have interviewed her about the Change.org petition, “Fat is Not a Feeling.” From the petition:

Facebook is the most popular social networking site in the world right now. With 890 million users each day, it has the power to influence how we talk to each other about our bodies. I dream that one day the platform will actively encourage body positivity and self-esteem among its users, but for now, all I ask is that it stop endorsing self-destructive thoughts through seemingly harmless emojis.

Her national advocacy is not surprising given her approach to playwriting. In fact, such activism is part and parcel of her research and voice as a playwright. From Catherine’s artistic statement:

“Catherine’s plays delve into the societal pressure placed on young women to be both impossibly good looking as well as ridiculously intellectual, humble, kind as can be, but sexy… Media pressure is always present in Catherine’s work and the characters can barely function without checking in…”