First Year MFA Liv Matthews (pictured below!) was interviewed by Second Year MFA Inna Tsyrlin about her play, She Moves In Her Own Way. 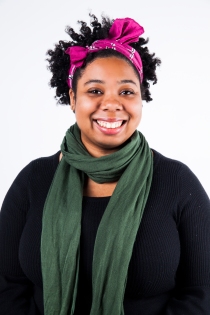 Liv Matthews: I love dancing. I love watching it, I love being in classes, I love going out dancing. It’s been a part of my life artistically and socially since elementary school. Many of my full-length plays involve a moment of dance, and it was just a matter of time before I wrote a full out “dance play.”
Playing sports was never my thing but both of my younger siblings played basketball growing up and were very good at it. When I was in high school, I saw my brother catch the ball before it went out of bounds. He was on his toes, in relevé like a dancer, and after that moment I couldn’t help but see basketball and ballet being similar in terms of gracefulness, discipline, and swiftness. Also, basketball and the culture surrounding it is very intense and filled with conflict, and before I really considered it similar to dance, I always connected it to theatre. “What story is happening on the court or in the bleachers? Who’s the victor in the end? What impact does this loss have on the other team?” I’ve wanted to write a story about basketball for awhile and I can thank my siblings for that.
The play was also based on a Madness I did with Shon Middlebrooks and Erik Armstrong (both featured in my reading) that involved family and basketball. Those characters are wildly different now but I developed the play from those original five pages. When I began to outline the play, my protagonist, Alex, was a secondary character but she was causing so much conflict that I decided to form the play around her. She wants to dance but basketball is holding her back. I wanted a way to make these opposing forces blend together, and I remembered their physical similarities.
Inna: Are there any similarities between the characters of She Moves in Her Own Way and you? Any pieces of you in your characters?
Liv: I love to dance like Alex. I was never determined to consider myself a “dancer” the way Alex is, or the way I would call myself a playwright, but that enthusiasm for dance is definitely present. I also connect with her willingness to try something different and defy expectations. If someone has told her she can’t do something, she takes it as the very reason to do it and push through… Like a few characters in the play, I do enjoy basketball and see the beauty in it. And while Josh seems to be the character I’m least like, I did spend a lot of time reading and seeing Shakespeare in high school (by choice).
Inna: You take ballet classes, how has that helped you in writing this piece? Are there any parallels between ballet and playwriting?
Liv: While most of my dance experience is in tap and jazz, I took ballet because of the comparison I saw physically between ballet and basketball. When done well, they both seem very effortless, but I know dancers and basketball players train very aggressively in the basics, or what my brother would call “the fundamentals.” When learning the fundamentals of ballet in class, it puts me closer to Alex and what her possible experience is going through certain moves. I’m mentally taking notes. “When I do a développé eight times at the barre, Alex’s thighs may burn like this. If I do piqués across the floor, this is what her feet look like afterwards. When I botch a pirouette or bust out two, Alex could feel embarrassed or on top of the world.” I take these notes and apply them to my play.
Basketball, ballet, and playwriting are grounded in structure and learning the fundamentals, but knowing the rules and executing them in one’s own personal style is when they become exciting.
Inna: Your protagonist, Alex, listens to Tchaikovsky although her coach thinks she listens to Drake. Anyone on your playlist who might be a surprise? Anyone on your playlist that you want Alex to listen to?
Liv: I always say I’m not a big country music fan but I’m from the South, so it was always playing somewhere. In high school, I ended up knowing the lyrics to  “Need You Now” by Lady Antebellum and I still really like that song. I’ve been a fan of Drake for a long time, and that song is like a country version of his song “Marvin’s Room.” It all comes together somehow.
Alex would listen to Cardi B when her parents aren’t around. Like me, she’s been listening to “I Like It” on repeat.
Inna: If you are hosting a dinner party, and anyone in the world could be at the table, who would you invite? Where would you host it? What are you making for dinner? What party game would you play?
Liv: While I was writing this play, I watched a few ballets and documentaries for inspiration, and I was very drawn to José Martinez, a former etoile for the Paris Opera Ballet, and Wendy Whelan, a former principal dancer of the New York City Ballet. They’re very strong and passionate when they dance and I want to know everything they know. I’d host it back home in Florida near a lake because the weather is nice. There’s a seafood soup I like to make so I’d whip that up for them. And no party games. They make my anxiety spike. Just good conversation and music.

Liv Matthews is a playwright from Central Florida. Her ten-minute play, “Home Going,” was produced by Playwrights’ Round Table in Orlando and is published in The Best 10 Minutes Plays of 2015 by Smith and Kraus. She has worked at the Alliance Theatre, first as a literary intern and then as the Kenny Leon Fellow. Her short play co-written with Dre Camacho, “White Picket Fence,” was produced by Working Title Playwrights in Atlanta. Her full-length plays explore family dynamics, the complexities of young women and teens, and the oddities and magic of the Sunshine State. And there’s often at least one dance number! When not writing, Liv can be found working through Chrissy Teigen’s cookbook Cravings, dancing to Beyoncé, and watching Desus and Mero on Viceland.

She Moves in Her Own Way

Three seconds on the clock. Rolling Hills Middle School is down by two. All eyes are on point guard Alex Williams. She dribbles, pliés, and shoots the ball. It pirouettes in the rim and Alex’s mind leaps across time to her coach and former Atlanta Hawks player Anthony Prince. As the athletes wait for the ball to land, Alex’s journey through basketball and dance begins a duet with Anthony’s distant rise to NBA stardom.

Tickets for the Stage Readings are FREE and open to the public.