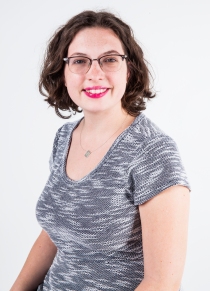 Katherine Varga: Your play features characters from Ohio taking a road trip to California. You recently moved from California to Ohio. Were any parts of the play inspired by your own cross-country journeys?

Jordan Ramirez Puckett: Yes, definitely. Part of the reason why my husband and I drove, rather than fly, from California to Ohio is because I knew I wanted to write this road trip play. For me, the most shocking moment on our road-trip was when we were pulled over by the border patrol in Texas. As soon as they let us go, I turned to my husband and said, “That’s going in the play”.

Katherine: Your character Mateo oftentimes speaks in poetry, sometimes in Spanish. Why did you choose to incorporate Spanish poetry into your play, and what was your approach to writing in a different language?

Jordan: I had written all of these rhymes in English before I realized how important it was to show the role that Spanish plays in Mateo’s life throughout the play. Mateo definitely wanted to rhyme in Spanglish, I just needed to figure out how to write them for him. I didn’t want to directly translate what I had written from English to Spanish. I thought about what he would want to express in Spanish, that maybe he couldn’t say in English, and tried to write that.

Katherine: What most scares you about this play?

Jordan: I relate to Mateo so much. He is the embodiment of a part of my personality and being on stage. But at the same time, I am very aware that I am not a brown teenage boy growing up in Athens, Ohio. And there is a lot of fear surrounding that, writing a protagonist who doesn’t look like you. I know that we have been forced to move differently through the world because of how we are perceived and I just hope that I have done him justice.

Katherine: What do you hope audiences will walk away from your play feeling and/or thinking about?

Jordan: I think the play is largely about the assumptions we make about ourselves and others because of our outward appearances. I hope that the audiences take that with them as they move through the world. And I hope the play makes the audience want to call their moms. That’s the barometer by which I judge most of my plays: how many people call a parent/loved one because they saw my play.

Katherine: What’s your favorite line or moment from the current draft?

Jordan: When Diane gets back to the hotel room after her date. I don’t want to say what happens here. But yeah, I might be a little too proud of that immediate brief interaction between her and Mateo. It’s funny and sweet and reminds me of my relationship with my mom.

Katherine: If you could take an epic road trip with anybody, living or dead, who would it be and why?

Jordan: This is such a hard question. On our road trip to Ohio, we listened to the Hamilton soundtrack more than four times, much to my husband’s chagrin.   So, I think if Lin-Manuel Miranda were down to duet some of my favorite Hamilton tunes, he would definitely be my pick.

Jordan Ramirez Puckett is a playwright and lighting designer based in the San Francisco Bay Area.  She often writes about being caught between two identities and our intrinsic need for human connection.  She received Abingdon Theatre Company’s Christopher Brian Wolk Award for her play, Restore.  Her other plays include Las Pajaritas (2018 Bay Area Playwrights Festival Finalist), Inevitable (production at San Francisco Playhouse), The American Traitor (production at Playwrights Center of San Francisco), and Gringo Baseball (staged reading at Goodman Theatre in Chicago).  She has designed lights for the world premieres of Bauer by Lauren Gunderson, 77% by Rinne Groff, and 1 2 3 by Lila Rose Kaplan, among others. She is a graduate of Northwestern University and the former Associate Artistic Director at San Francisco Playhouse.

2,000 miles, a cross-country car ride
adopted son and mother travel side by side
white woman, brown son in the same space
9 states to the hospital, the teen’s birthplace
4 days, if all goes according to plan
5 nights, of doing all that they can
to find his birth mom, identity, or home
but by the end of their journey
will any answers be known?

Tickets for the Stage Readings are FREE and open to the public.

In 2000, George Sherman, retired Ohio University professor emeritus of theater, established an endowment to create the Scott McPherson Playwriting Award to honor the all-too-brief life of OU graduate, Scott McPherson. Scott, who graduated from OU in 1981, was a renowned actor and playwright.  He is best known for his critically acclaimed, award-winning play, Marvin’s Room.

Scott, who died of AIDS in 1992, often spoke eloquently, both in his writing and in interviews, of the personal and familial ravages of chronic illness and the need for loving support and connection with lovers, family, and friends.  Upon establishment of the award, George Sherman wrote, “Scott was the least envious, most generous, amusing and supportive friend you could hope to have even if you happened to be another writer.  He had his own ambitions, of course, but they never depended on someone else’s failure.  He was there to support and encourage, if that’s what you needed; critique, if that’s what you requested, but always in a way that encouraged; therefore, it seems fitting and appropriate that an award designed to encourage new young talent should be made in his name, accomplishing the twin goals of remembering him for what he did and, as significantly, for who he was, and hopefully, through this award, who he shall continue to be.”

Marvin’s Room was first produced by the Goodman Theatre in 1990.  It has also been produced at the Hartford Stage in Hartford, Connecticut, Playwrights Horizons and Minetta Lane in New York City, and at The Kennedy Center for the Performing Arts in Washington, D.C.  It recieved the Drama Desk Award, the Oppenheimer Award, the Obie Drama Award, the John Whiting Foundation Award for Writing, the Joseph Jefferson Award, and the Outer Critics Circle Award.  It was also made into a major motion picture starring Meryl Streep, Leonardo DiCaprio, Robert De Niro, Diane Keaton, and Hume Cronyn.  He finished the screenplay only weeks before he died.